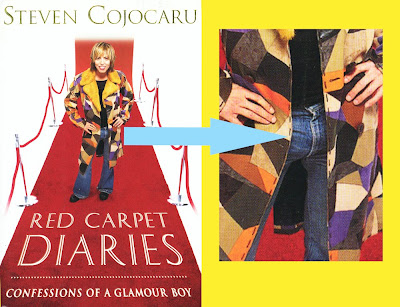 Have "Red Carpet Diaries" next to your throne because you don't want to have to think you should be doing something better with your time when thumbing through the pages. It's an odd Plan 9 From Outer Space like autobiography of Cojo, the "famous style columnist" (I never saw him before) who's not afraid to "dish the dirt". Odd because he dishes NO dirt, has stars names in bold print throughout to entice the possible purchaser that we'll get the inside dope on these celebrities, yet most the time he's just mentioning the stars without having ever met them, spoken to them or having anything to say about them. It's hard to put down because on every page you can't help but go "What?!" (or maybe, "Girl, Please!"), and have to see what you'll go "What?!" at on the next page.
Hearing him complain about his apartment in LA that his parents pay for while he goes years without looking for a job, recount everything he ever said that he finds funny (OK, I'm guilty of that too) and his general life dream aspirations of being a 10th tier hanger on of the famous is frightening. This is a character study interesting in it's complete vapid shallowness.
Also, let me go Zapruder on the cover photo (I'm beginning to think my references are becoming just for the elderly). What's up with his crotch?! Unveiled in the opening of a jacket that was never in fashion (Snap!) is a stuffed pair of Levis that must contain at least 7 socks. Let me get my laser pointer. His shoes are pointing to his right. If anything his hips might be facing us, but his fly is angled WAY to his left. It looks like he's trying for some 3-D effect with the zipper line. Now I'm a guy with a package (thank-you) who likes to look as substantial as possible, but this is like guessing how many jelly beans are in the jar. I'm figuring 4 ankles sock, a pair of stockings and a leg of lamb.
Yes, I'm ready for the "Mitch, you sure like takin' about guys bulges, don't ya!" comments, but if that's the price I have to pay to warn you or entice you (like watching my new favorite film "The Room"), I'll suffer though the slings of the the sad little people who know no better.
Look through the bargain bins, pick it up of for a penny (really) on Amazon, or just drive by my house and have my copy. It's on the porch now!
Posted by Mitch O'Connell at 8:01 AM