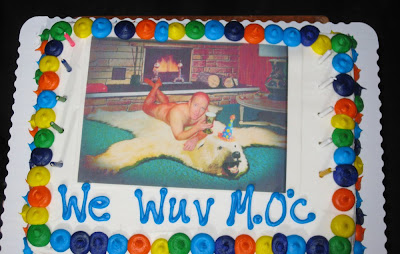 Party Time!
I've been planning as the finish line of renovating the house (aka fixing the slow slide of disrepair) some type of get-together bash. It took 2 years to finally happen! That it ended up on my birthday was pretty much a coincidence, but I'm sure the date flicked a "now or never" light in the back of my head. I kept the 50th thing on the "down-low" (that's one reason I still look so young. I've always got the "with it" patter), but apparently everyone was well aware of that golden anniversary.
My goal was just to complete up every repair, revision and remodeling project in time. By 5pm on the 26th, the omnipresent ladder, symbolic (and necessary) of all the work that we've been walking around (and sometimes climbing) for 24 months was carried and locked in the garage. To stay.
My party expectations were modest (and realistic). Maybe 30 people would show up, we'd have fun, then I'd stew about the friends that didn't show up (I'm12% grouch) and go to bed. First surprise. I see faces that I'm well aware of, but not in Chicago. My sister Annie and my brother-in-law Anthony walk into the house. I'm am stunned, yet I pull myself together enough to make a clever, witty comment. I think it was "Wha...?" or it might have been, "Huh...?" I'm, of course, thrilled they came AND they even ordered food AND a cake! I shake my head dumbfounded at their generosity. More folks arrive, I'm having a great time, then I get my second jolt. My dad and his wife Bobbie stroll in from California! Well, they didn't stroll the whole way, I think they flew most of the distance, but still! This is TOO much! My smile gets even wider! Party stuff continues, I'm guessing 100 or so folks have crammed in 'cause you now have to walk sideways to make it through any room, plenty of food and beverages are available (and consumed), Leo is the DJ with his phonograph and albums, I'm giving tours, Kieran is upstairs entertaining all the kids, we have a raffle to give away two big boxes full of crap (collectibles), good times, good friends, and, at 11:45pm, good night! Everyone starts to file out, then the last two holdouts, Spenser and Margaret, tell me to get in the car, I'm being kidnapped. I'm still groggy from the surprises, so I obediently hop in for the ride. We drive for awhile and end up at Halsted and Belmont. Margaret points out to Spenser that Playland is just to the left. Now I think I understand! One of my favorite late night entertainment excursions has been to hit the Belmont Burlesque Revue every once in while for their midnight Saturday shows. Now I start to get full of myself and remember that the BB emcee (and pal) Mark Henderson said he couldn't come to the party 'cause they had a show that night! It's already 12:30, so we've missed half, but I bet they bought tickets and maybe Mark is gonna give me a shout out from the stage!
As we walk in I see big banners with my "M.O'C" and "50". All my pals are in the audience. Mark is with the mic and gives me a big smile. I've walked into a surprise Mitch Roast.
Now, as you might know, I have a schtick where I like to act like I'm hot shit. But at that moment, even in my numbed dazed blissful shock, I really did feel like I actually had it going on! Mark (Jack Midnight) Henderson started off the roast explaining how raw, searing and painful it was going to be, but all the hurled barbs referring to me being a womanizing, alcoholic serial killer (for starters), just felt like rose petals being gently tossed from baskets. The roasters went on to include Brian Johnson, Chris O. Biddle, Linda Lessman, Bill Reinhold, Lisa Pangborn and, the man who started this whole ball rolling, BFF Mark Braun. In-between the "hurting," talented and beautiful performers kept the excitement going. Donna Touch, Trixie Sparx, Jeez Louise and Red Hot Annie gracefully gyrated (with maybe a grind or two thrown in for good measure) and the equally beautiful and talented magician, The Amazing Tomas, was, like every second of the evening, magical.
Apparently ringmaster Mark B came up with the idea right before I announced my own party. I don't know all the details (in fact it's amazing that EVERYONE knew but me, yet the secret remained just that), but it seems he went to Mark H with the concept and the intensive planning started. There was a Facebook invite page for the roast, a whole show to put together, flyers and posters to design and be printed, many, many hours of many folks time was given and much money must have been pulled from billfolds.
I could not be more humbled and touched by the incredible sweetness and generosity of everyone involved. To have this effort be put to making this evening special for me is head spinning, completely unexpected and the best birthday gift I have ever, and will ever receive. I will forever be grateful (and stunned) to have such wonderful friends. I've always considered myself blessed and lucky just for having my kids, my health and a way to earn a living, but I've been made aware that I'm also very, very lucky for so much more!
See ALL the pics at my "open to the public" Facebook folder! Just follow the link below...
http://www.facebook.com/album.php?aid=290600&id=537909600&l=30f797ae21
Posted by Mitch O'Connell at 6:23 AM