A Classic Blog from Way Back When! 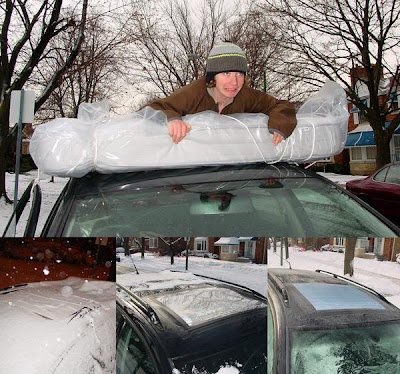 Gone Hillbilly!
Went with handsome son and decorating consultant Leo on a freezing winter day to pick out a new bed at Ikea.
Getting divorced (not fun) redoing the house any damn way you please (more fun).
I brought 2 100" ropes with me and we strapped the queen size mattress to the roof of the '98 Passat Wagon as tight as possible (the frame fit snugly inside). Starting out the parking lot you could see the front of the mattress overhanging the windshield, so far, so good. The windy city was quite the blustery windy city that day and once we hit 60 on the highway we noticed that something seemed different. The mattress had disappeared! Fearing it had flown off into a busload of handicapped orphans (tonight on News Center 5, local artist kills 37 children with bedding!) we quickly opened the sunroof for a better view. The mattress was bent at a 90% angle right in the middle with the front half of it sticking straight up doing a wild herky jerky dance. We flung our hands right through the opening, grabbed the ropes, and held on for dear life. I screamed, "Leo, get on top of the car and we'll use your weight to hold the mattress down!" Leo looked at me as if he was 90% sure I was joking. The 10% was pretty funny.
Once we made it home, sore arms and all, I declared it comedy photo time. Leo jumped on the mattress and with upshots we tried to simulate the car going down the highway. Well, we didn't quite pull off the desired effect, it looked like a kid on a parked car in front of his house. Leo jumped up, "Get one of me standing!". "Don't jump on the roof!" I yelped, fearing a dent. Too late.
Didn't notice a problem until I tried to close the sunroof. No go. The sunroof serves no purpose for me. In summer it's good if I want my big bald head beet red. In winter... well I was about to find out. Yanking, kicking, hitting, pleading, the power of prayer... nothing worked. I drove the cardboard protected vehicle through the start of 6 inches of snowfall over to Pete's Auto to let the professionals take over. Within 10 yards the cardboard blew off. I explained the problem to them wearing a snow hat. Literally (get it? Who Ha!). The following day the Pete's crew met me with downcast eyes. Nothing could be done. They recommended the Toyota dealership. When the word "dealership" was mentioned, for some reason the sum of $800 appeared in my mind. I don't have a spare $800 (see "divorced" in sentence 2), but the word's of a wise friend sprung to mind. Duct it or F**k it. I made the decision to go full throttle white trash on it's ass. First a sheet of plexiglas was taped securely down, then a second layer of a folded over tarp was tightly ducted down over it. Damn it, if I was gonna go hillbilly, I was going to be from the ritzy side of the trailer park.
One month later and it's holding up great.
I'll make sure to keep you up to date with any other M.O'C car repair tips!
Posted by Mitch O'Connell at 7:40 AM