My photo arrived in the mail, which prompted me to muse- 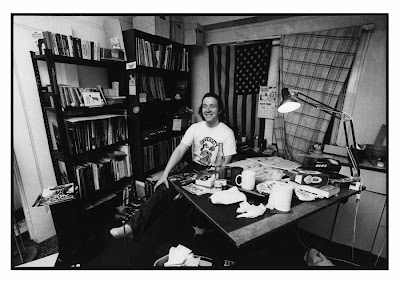 Now that I've purchased and renamed the John Handcock building (now the Mitch O'Connellcock) I can look back (from the penthouse view) at my humble beginnings and wistfully shake my head and chuckle. The first place of my own was in a building titled, "Artist in Residence", a former apartment hotel that was a mix of tenants that had been there so long the structure had actually been built around them mixed with young creative types that were drawn by the $190 a month studio apartment rent. "Creative Types" means "No Money". It was filled with charm, which is how I imagine a realtor describing it's qualities. My studio mascot was a cockroach forever frozen in a surprised mid stride atop the dented metal cabinets. What kept him from moving was the thick coat of spray gun white paint that was used to efficiently cover him and the walls. His still mobile comrades kept me entertained whenever the oven was turned on (usually for heating purposes) which was their starting gun cue to race up the wall behind it. I was always prepared with paper towel wad to smite as many as possible. You also couldn't leave any unfinished beverage within a yard of a closed window during winter, because by morning it would be frozen. In summer it was also a good idea to keep the windows shut before going to sleep unless you wanted to be awakened by the bewildered cooing of pigeons strutting in front of the fold out couch. What about screen windows? You're thing of Oprah's apartment. My Chicago sky-line view were the bricks of the 8 foot away adjacent building. To check the weather you had to lean out that same window and look straight up to see the sliver of sky that peeked through between us. Mice kept my cat Macho entertained. Just make sure you gingerly watched your barefoot step while traversing the battlefield carnage. Water pressure was non-existent. The secret of cleaning my garage sale plates was to let the steady drip drip drip torture from the faucet drive the glowing orange residue of store brand macaroni and cheese mad until it fled screaming down the drain. Musical ambiance was provided when my neighbor would start practicing her piano daily at 11pm. I would usually helpfully suggest, through the non sound muffling walls, that she "Shut-up" around 3am. Outside soundscapes were often the forte of gunshots. I didn't tell anyone armed to be quiet. Leaving the studio was to enter an in-progress game of hall ball. I was once beaned in the head while the children yelled, "Doesn't count! Doesn't count!".
Oh, and by the way- I liked it!
Posted by Mitch O'Connell at 9:19 AM