Music to My Ears! 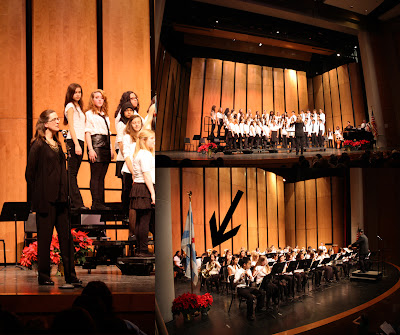 The Peterson School Winter Concert (Including Beginning Choir, Intermediate Choir, Concert Choir, Smiling Strings, Beginning Band, Concert Band PLUS Caroling. I had to shave twice.) thrilled the standing room only crowd mainly because, and I'm sure you'll agree, the singing AND euphonium skills of Kieran O'Connell!
Take my word for it, that IS Kieran behind that euphonium (rocking the retro "Knack" look), but I also had the giant arrow dangling arrow hung from the rafters so no one could miss her. It was well worth the expense!
Posted by Mitch O'Connell at 8:31 AM