Don't remember exactly where this fair was when I caught it, but did meet Grady Stiles Jr, "Lobster Boy", who apparently quite a dick in real life, or at least that's what his wife and stepson claimed after they killed him a few years later (his life story, the book "Lobster Boy", has 18 used copies for 1 cent each on Amazon if you're interested). Adjacent to his tent was fat lady Suzy Farmer. For a buck or two extra I purchased signed cards from both of them. On the back of Suzy's she also wrote, "Best Wishes From Suzy Farmer Age 36 4'6' Shoes 3D". This must have been around 1987 because I found a newspaper article from the Maryland Fredrick Post by Michael Enright published while the two performers were on tour*.
But the highlight for me was the Snake Woman (for you historians, not 100% sure that the interior shots are from the same show), a classic trick done with mirrors where you'd look down into the display to see a real living carnies head that appeared to be attached to a large faux boa constrictor body. A handpainted sign proclaimed "No Photography" but I wish I had tipped someone $5 (or just snapped away anyhow) to preserve the moment. The Snake Woman, guessing by the unshaved chin, was a man, and his sad sack slack expression and unfocused eyes made on think he was picked because he was so hung over, or still so smashed, that sitting there with an ill fitting brown wig was all he was capable of that morning. Tomorrow it might be someone else.
Oh, back when the sideshow was seedy fun! 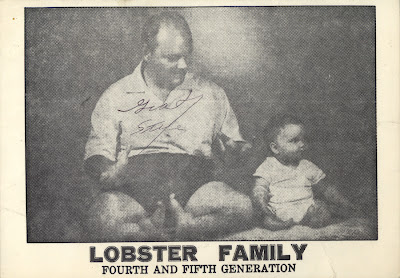 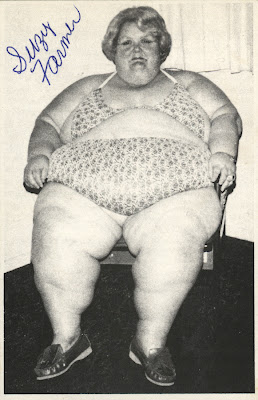 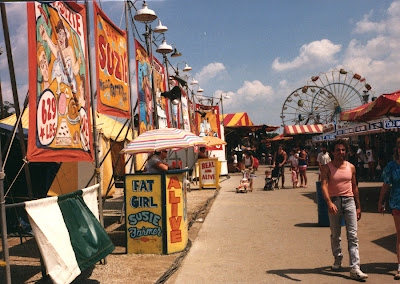 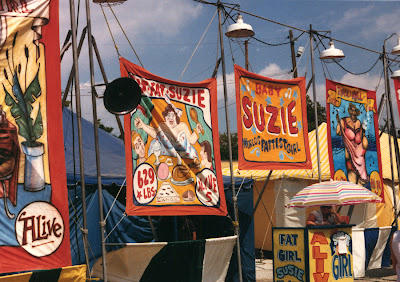 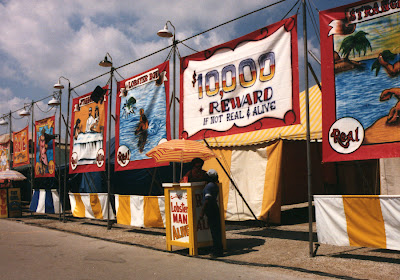 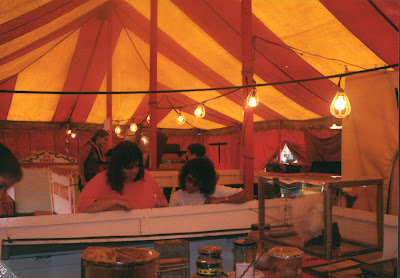 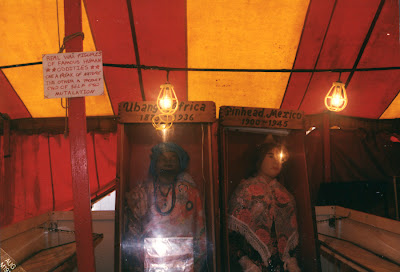 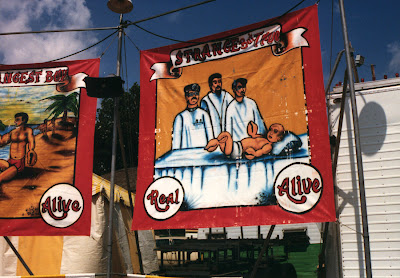 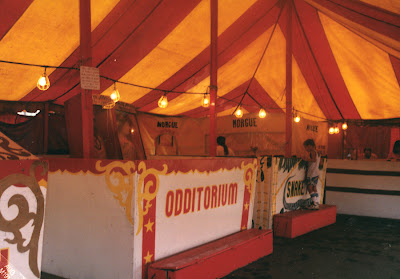 *Nearly every man uses his hands to make a living. Some men use them to work the soil, others to write legal briefs or hammer nails. Grady Stiles II makes a living by letting people look at his hands.
"I'm the last true freak attraction around," he says, tearing a $1 ticket in half.
I am known as the Lobster Man. I am known by that name because by hands are shaped like that of a lobster claw, as you see here.
"$10,000 If Not Real and Alive!," the sign on the Midway screams. Don't be aftaid to look - step right up.
That's how Mr. Stiles, who finishes a weeklong stint at The Great Frederick Fair today, provides for his family. And if you have a good question - go right ahead and ask it. The Lobster Man gets tired repeating that same speach a hundred times a day.
The awe-struck faces in the yellow and white-striped tent stare and stare and stare. The bolder ones ask questions and when they do - for the most part - they are not joking.
"Do you eat raw fish?", a wide-eyed boy in a black Nightrider t-shirt asks.
"Are you in the Guiness Book of World Records?", says a teen-age girl, clutching a huge grey alligator to her chest.
"How do you . do you ... do you get used to being with, with that?" says a nine-year-old boy, his eyes never leaving Mr. Stiles' hands.
As the afternoon wears on, Mr. Stiles' well worn spiel becomes more and more abbreviated.
My great-grandfather, my great aunt and my dad before me was born like this. Instead of feet I was born with the flippers, or feelers, of a lobster.
There is a cleft through the middle of both of Mr. Stiles' hands. He has two thick, long fingers on each hand. When a person shakes them, they grab one of his fingers and the other clamps on top.
His legs are barely developed below the knees and instead of a foot, each leg tapers to one lone toe.
When he goes into his Lobster Man speech, he snaps the elongated fingers together and twirls his two toes. When he is finished talking, he grabs a lighter and fires up a Pall Mall. He sips an iced tea.
"I look different but I get the same thrills and excitements that you do," he says, leaning forward again to collect tickets, oblivious to the murmurs and elbow nudgings. "When I'm at home I have friends and enemies like everybody else."
His great-grandfather, a farmer in North Carolina, was the first Stiles to display the deformity, he says. The genetic imperfection has been passed on to each successive generation of the family.
He started in the freak show business with his father when he was 6 years old. That was in 1943, when sideshow attractions were a big draw at the state and county fairs. He was scared to death.
"All these people looking at me!". Mr. Stiles sahs with a start. "That was a little scary for someone so young."
But the years went by and when you're that young, you can learn to adapt to almost any situation.
The other sideshow attractions became his best friends and he remembers their names to this day: Grace Williams, "The Mule-Faced Woman" Betty Lou Wiliams "The Double-Bodied Woman" and Frank Lenetti, "The Three-Legged Man."
All are gone now, he says, ever since the bottom dropped out of the business. He is currently traveling with "Fat Lady" Suzy Farmer and wonders aloud how many more years he can take of the same speech, the same questions and, of couse, the same stares.
"The long days are really getting to me," Mr. Stiles said. "I used to 'jump' at every show but I just don't have it in me anymore."
When the Lobster Man "jumps", he uses his arms to propel himself forward on his table, sometimes leaping over the bar that restrains onlookers and onto the ground below.
These days, Mr. Stiles spends most of his 12- to 14- hour days sitting on a table top pillow, rocking forward to collect tickets or sliding to the left to get another cigarette or glass of tea.
I am married and have four children. Two are normal and two like I am. This is a picture of my family. This is my daughter and this is my son.
Grady Stiles III often pushes his wheelchair from his father's tent to the blue and white one next door, where 500 pound Suzy Farmer can be found. They are best friends, his father says.
The son of the Lobster Man was born with the same deformities as his father but he is not alowed on display at The Great Frederick Fair because of child labor laws in Frederick County.
A moon-faced boy, he smiles often and shows a great deal of affection for his mother, Barbara Stiles, who pops in and out of the tent when her duties as the ticket seller slacken. 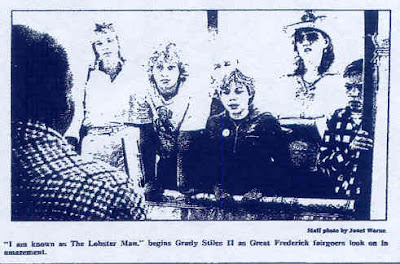