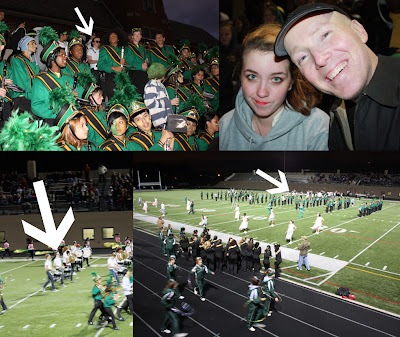 With Leo's first performance/initiation with the Lane Tech marching band the drum line showed they were just as tough as the football team. The drummers went with a '50's theme for Homecoming Week wearing their hair slicked back and white t-shirts, the bad news? A freezing night, that turned into a rainy night by 3rd quarter, that turned into hail by 4th quarter. Good news? Even though he got soaked through playing in the stands, his overly greased hair kept the rain from reaching his head hopefully preventing typhoid fever.
Kieran and I suffered under a few layers of clothes under an umbrella while munching on hot dogs and sipping hot chocolate. Don't worry, we're OK!
Afterwards, all smiles! The fancy beats and snare drum stick twirling went off perfectly. And the football team won. Go Indians!
PS I told Kieran the Lane Tech mascot was a yak, which would a) be cool, b) not offend anyone and c) lend itself to some fun chants.
Yak, Yak, Yak, time for a sack!
Yak, Yak, Yak, kill the quarterback!
Yak, Yak, Yak, we have team spirit and have practiced frequently leading us to hope that we'll have a good chance of winning!
Posted by Mitch O'Connell at 6:21 AM