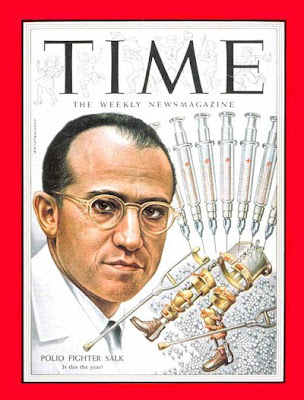 Only one day into my tribute to woman and it's turned sour!
Apparently I'm "sexist" (which according to my dictionary, surprisingly doesn't mean "sexy") and "misogynic" (which also surprisingly doesn't mean "sexy")!
So in the Mitch fair and balanced no spin zone, to placate the little ladies, I'm going to throw one guy into the mix of my week long celebration of "people"!
In 1947, Jonas Salk accepted an appointment to the University of Pittsburgh Medical School. While working there, with the National Foundation for Infantile Paralysis, Salk saw an opportunity to develop a vaccine against polio, and devoted himself to this work for the next eight years.In 1955 Salk's years of research paid off. Human trials of the polio vaccine effectively protected the subject from the polio virus. When news of the discovery was made public on April 12, 1955, Salk was hailed as a miracle worker. He further endeared himself to the public by refusing to patent the vaccine. He had no desire to profit personally from the discovery, but merely wished to see the vaccine disseminated as widely as possible.
Posted by Mitch O'Connell at 8:03 PM