Kieran and I have gotten into the habit of taking the 2 mile walk to the mall and back as some fun father/daughter time. OK, I take the strolling part as the fun father/daughter time and she claims the destination as the fun daughter time.
An hour is killed while we stop at 5 or so "hip" clothing stores, she tries on a bunch of clothes, buys nothing, and we head back.
While I was twiddling my thumbs on the bench next to the Old Navy changing rooms I noticed a foot wide rubber ball sitting on the shelf. I remembered my daughter turning right to find a room and I spied two feet in striped stockings peeking from the bottom opening. Just to make sure I inquired, "Kieran?!" and I heard a "What?!!" reply. That gave me enough assurance to toss the almost basketball in the air so it entered smack dab through the middle of the open stall top. A scream echoed from inside and the ball rolled out from under the gap of the door after (I'm guessing) bouncing off the occupants head. I smiled, my parental duty done, and went back to relaxing on the bench.
Ten minutes later, finally done, Kieran opens the door and leaves the room. Except it isn't Kieran. It's a 60+ year old woman who doesn't look related to me in any way. I only have a second to look dumbfounded as Kieran walks from the opposite side and announces, "I'm finished!" 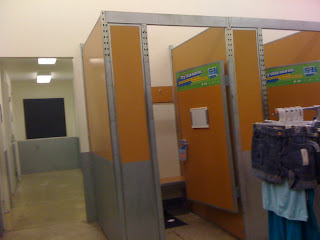 I grab her elbow. "Let's get out of here. I have something you won't believe to tell you!"
Posted by Mitch O'Connell at 7:24 PM