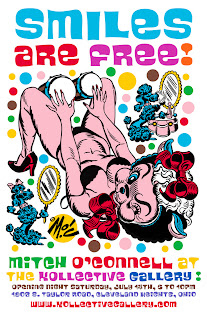 Making a gallery show in Cleveland into a full-filled vaction! 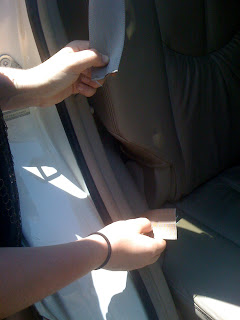 Our first bit of roadtrip adventure! Kieran tries to get out of the car for lunch and finds she's hopelessly trapped in the seatbelt. It's unlatched, but she's lassoed like a calf. Some combination of her slumped over sleeping, turning around and who knows what other gymnast maneuvers results in a new knot that even the Boy Scouts haven't thought of. My go-to plan of dealing with tense situations- 10 minutes of being frustrated and irritated - oddly doesn't help, so we go to a Shell service station where an actual professional tells the only solution is to cut her loose.
This trip is getting expensive. 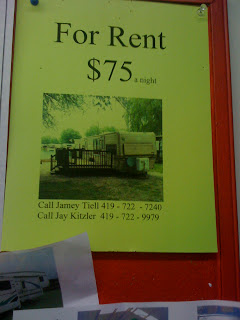 Damn! Why wasn't this listed on Hotels.com?! We paid TWICE as much for a Hilton Garden Inn. And you can't even drive the Hilton around town! 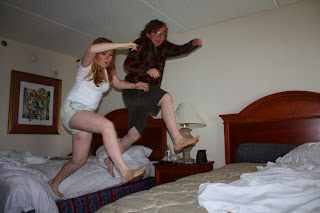 But it did have the advantage of 2 beds. 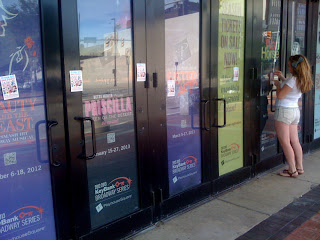 My staff has made sure Cleveland is blanketed in flyers! 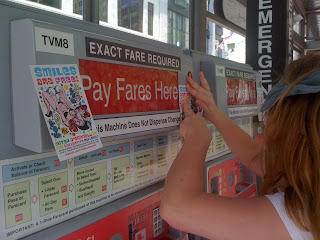 We're especially looking for people that know how to take money out of their pocket. 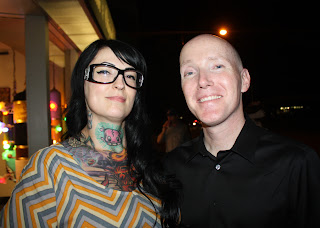 Even though Andrea Thornton was a little peeved that she had to wait in the line just like everyone else to get a picture taken with me (I don't play favorites) and additionally put off by the $10 charge, she did manage to get into the spirit of the "Smiles Are Free" show by, for the first time ever in front of a camera, almost breaking into a grin.
If you put your eye right up to the screen you can almost see it! 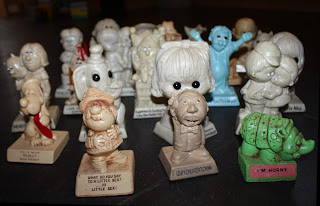 Note to future gallery owners vying to have a Mitch O'Connell show at their venue-
Always greet your artist with the gift of a boxfull of '70s Russ Berrie statues!
Nothing says "I respect your genius" more than a collection of delightful quips emblazoned on dozens of miniature novelty statues!

Even though I must have explained to Andrea 1000 times that I was to be the sole center of attention at the Kollective Gallery opening, she must have had wax in her ears, because she insisted on bring the newest member of her family, Miss Boston Baked Beans, to MY show!
Well that little spotlight hog pretty much ruined everything. People were more concerned with telling her how cute, fuzzy and adorable she was than telling ME how cute, fuzzy and adorable I AM!
Well, one guy did rub my tummy, but I think he was drunk, so I don't know if it counts. 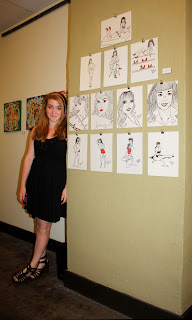 Speaking of being outshined at my own show, in addition to Ms. Beans, daughter Kieran took over a wall to showcase her Bettie Page marker renditions.
All money earned will go toward the 6 outfits she purchased during our family trip.
Please help a young lady stay fashionable! 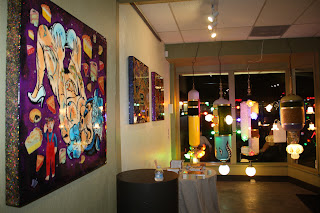 An amazing show!
I'd give you an attendance count, but I just dropped of the Kollective Gallery arial photos at One Hour Photo ten minutes ago. When I get them back, I'll get out my magnifying glass and calculator and start counting! Conservative police estimates vary between 10,000 to a million (I imagined in a dream I had last night). Anyway, the thing that's really important is that for the folks that DID show up got to meet ME! What a thrill it must have been! 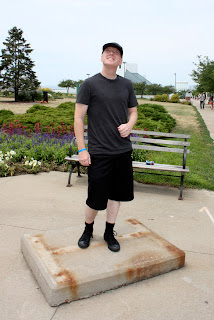 In appreciation of me deciding to show my art at the Kollective Gallery in Cleveland, Mayor Frank Jackson agreed with the outcry from the peoples of Ohio and unveiled plans to erect a golden life-size (6' 3" if you're wondering) statue of yours truly! I took a break from my busy schedule of doing all the exciting things there are to do in Cleveland (like visiting the Rock and Roll Hall of Fame and... did I mentioning visiting the Rock and Roll Hall of Fame?) to pose for the sculptor. Expect to see the majestic finished results by Fall 2012!