Objects Are Closer Than They Appear! 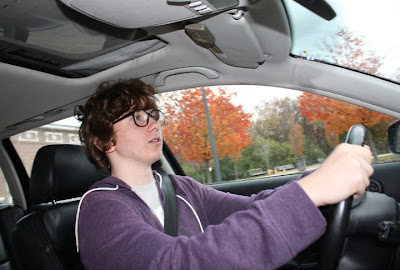 Leo has his learners permit.
That's like saying the zombies have just about broken through the front door.
You get the same feeling of impending doom in the pit of your stomach.
For his first time I drove with him to a fairly vacant residential area that mainly services a retirement home. I figured the elderly are generally quite frail and wouldn't do much damage to our 1998 Passatt Wagon if "tapped" while they were walking seemingly aimlessly in bathrobes and slippers around the grounds. Hmmm, I forgot about those wheelchairs and walkers. Those could do a good bit of destruction if dragged under the vehicle. Luckily for both of us they must have sensed danger (they didn't get this old by luck) and huddled safely inside doing whatever old people do. Staring blankly and eating peas I'm guessing.
On the way there I gave him Driving Lesson #1, titled "How To Impress The Ladies". The radio was turned to "The Loop" (classic heavy metal), twisted to full volume and windows rolled down so all could enjoy. We bobbed our heads, flashed the devil horn signage yet didn't seem to garner any interest of the female kind. Everyone has an off day!
Once there Leo took the helm. As soon as he put the key in the ignition I whipped off my seat belt, flung open the door and ran screaming. After I got that bit of comedy gold out of my system and returned, we began. He drove flawlessly, impressing me with his ability to control the car perfectly at speeds approaching 2 miles an hour. I had to shave twice by the time we arrived at the first stop sign 20 yards away (oh snap!). He executed a left turn, then a right turn, then another left... YOUR OTHER LEFT!!!!!
I didn't faint... did I?!
The only folks brave enough to try using the crosswalks were deer and geese. They were all graciously given plenty of time to reach the other side. After an hour of going 'round 'n 'round, and becoming hungry for supper, we concluded our first session and declared it a success with the Passatt no more dented and dinged than when we stared and all our limbs breakage free. A perfect 10 out of 10!
Posted by Mitch O'Connell at 5:51 AM